Sir Robert Balchin (President) and the Trustees of the League of Mercy have announced that the Badge of the Order of Mercy was conferred in July 2007 upon the following:

The Companion's Badge has been conferred upon Alderman John Stuttard (The Rt Hon the Lord Mayor of London ) and Dr Kenneth Scott OBE for services to the League of Mercy. 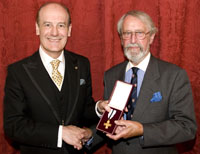